“Dear honoured guests. There are four reasons for our success in this world and the hereafter; believing in Allah, performing good deeds, obeying Allah’s commandments and striving in faith and worship. This is stated by Allah in Surah al-‘Asr. Alhamdulillah, we have many buzruq [1] with us today who could help us in our dakwah efforts today in Malaysia especially in Terengganu. They could help us in the matters of masa’il [2]. The knowledge of fadha’il [3] could be attained if we are istiqamah in attending religious classes. It is just a matter of us forming zihin (way of thought) in ourselves, worrying about the matters of our ummah.” The announcer for Bayan Maghrib [4] in front of Zul is said to be from another state. Maybe he’s from Kedah based on his dialect.

“So, is anyone willing to dedicate some of his time to join us in our effort of faith and worship? Let’s together learn to islah [5] ourselves.” Asked the bayan announcer. Straightaway, a man in his 30s, wearing a white kurta and turban stands up with a notebook and pen in his hands. “Insya-Allah dear sirs, even if it’s a day that’s fine or three days, that’s ok too, insya-Allah.” Such are his words to the audience.

Zul turned his head sideways glancing and looking at everyone around him. Several of them are already raising their hands showing their willingness to participate in the khuruj fi sabilillah. [6] “Alhamdulillah sir, a day is fine. For the gentleman way over there how many days? Three days? Alhamdulillah. The brother here in front? Ten days? Subhanallah. Insya-Allah, Allah’s nusrah (help) will always be with us and ease our maqami [7] and intiqali efforts,” the bayan announcer stated smiling happily since a lot of people are willing to join them.

“A month, insya-Allah.” Zul answered flatly when asked. The whole place went silent as soon as they heard his answer. All eyes were on him, gazing at him excitedly. Others were only able to join for a day or three and at most ten days, but for this young boy, he’s committed himself for a full month!

“Subhanallah… congratulations young man. You’re truly honoured. So, you’re still completing your studies? You’ve attained jazbah[9] in delivering dakwah at such a young age,” the bayan announcer acknowledged Zul. For Zul really, it was just that he has never had the opportunity to join any Tablighi Jamaat nor did he have any experience following any Tabligh programs. Hence, for the long holiday of his Year 4 Thanawi, he plans to make full use of his time with beneficial activities. He had only just read the history and life of Maulana Zakariyya al-Kandhlawi and Maulana Ilyas al-Kandhlawi before, this would be a great opportunity for him to experience it himself. 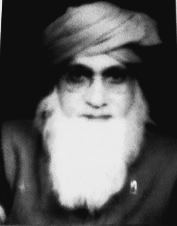 Zul was first introduced to Tablighi Jamaat when he was just 13 years old. At the time, International Tabligh Ijtima’ was held at Bukit Besar, Kuala Terengganu in 1982. Zul went along with his father to listen to the bayan delivered by Maulana Umar Palanpuri, who was popularly known by his monikers al-ra’is al-mutakallim [10] and tabligh ki zabaan (the tabligh’s tongue). It’s a rare sight nowadays, people carrying pots and pans with them. It was a norm during the 70s and 80s eras.

Zul has never witnessed thousands of people gathering at the Bukit Besar public field to listen to the bayan before. From afar, he could see groups of people carrying pots, pans, plates and bowls arriving and exiting the buses. They were wearing trousers or jubah that reach to their ankles, turbans neatly wrapped around their heads and most of them are with long well-kept beards. As they approach him, he could then see most of them have the miswak (which was used to brush their teeth usually before prayer) in the pockets of their shirts. Every time one of them walked past him, he could smell the attar perfume from them. This is the general image of the Tabligh congregants.

(Allah is the Almighty. Nothing is powerful. All successes are from Allah. Everything is under His Sovereignty) Maulana Umar Palanpuri speech may be modest and simple, however, it touches peoples’ hearts.  He was in tears when he recited the statement of Allah SWT:

“Indeed, those who have said, “Our Lord is Allah ” and then remained on a right course – the angels will descend upon them, [saying], “Do not fear and do not grieve but receive good tidings of Paradise, which you were promised.” [11]

All the attendees were listening attentively to the bayan delivered by Maulana Palanpuri which was translated by the mutarjim who is a Malaysian. Hadratji In’amul Hasan was seated in the front row among the others. All of them were busy taking notes of the speech given by the Maulana. Zul was among them, listening carefully, whilst fiddling with the small stones on the ground. Usamah bin Syarik radhiyallahu ‘anhu narrated the environment when the Prophet PBUH was giving a sermon as:

“I came to listen to the Prophet PBUH, at the time, the other Companions were sitting with him, as though there were birds on their heads. I swiftly gave my salam and sit with them.” [12]

Ibn Qutaibah rahimahullah explained the meaning of “as though there were birds on their head” as:

“They were in such stillness and quietude, lowering their gazes. For birds would not perch on anything unless it’s not moving.” [13] At the end of his bayan, he urged in Urdu: “We should always follow the straight path and never deviate to the bent route.” The mutarjim translated it as he understood it. However, when he translated the bent (bengkok in Malay) route, Maulana Umar Palanpuri turns his head suddenly and asked thoughtfully, “Did you say the city of Bangkok?” Some Malaysian karkun [14] and masyaikh [15] started to chuckle.

“No, Maulana. What I meant is deviated or bent path. It’s bengkok in Malay,” the mutarjim explains smiling. The Maulana nods his head in understanding and followed to laugh along with the audience.

Zul and his friends from SMAASZA who had given their names are asked to go to Markaz Tabligh Kubang Bujuk. The Markaz is built by a well-known affluent man named Haji Muda in Terengganu, not far from his own residence. It was just a ten-minute journey. There, Zul learned and studied comprehensively regarding the sunnah of the Prophet PBUH, trained himself to have istiqamah in waking up and performing tahajjud every night and increasing his worships, especially during the syabguzari nights. [16] Me while attending the Tabligh Ijtima’ in Tongi in 2017

Zul was also taught to practise the six principles of the Rasullullah PBUH through muzakarah [17] regarding kalimah tayyibah (syahadah), performing prayer with khusyu’, the knowledge of dhikr, ikram muslimin, sincerity in intention, dakwah and sacrifice. Mealtimes are among the most awaited times. Sometimes, Zul would volunteer his service for khidmat ta’am [18]. The dishes served are delicious and sumptuous and they would eat the food served in trays together while it was still hot. The old, young, Tan Sri, Dato’ Seri, clerk, janitor are all honoured by Allah SWT. Hence, everyone shared their meal together happily.

Since Zul is a local, he was appointed as rahaba [19] to help ease the job of ghast [20] in the surrounding areas. If there is any bayan hidayah [21], bayan wafsi [22] or ta’lim classes conducted by Fadha’il Amal, he would attend them all. In his free time, he would read Fadha’il Amal by himself, which was composed by Maulana Zakariyya al-Kandhlawi. Alhamdulillah, even in the middle of his tight month-long schedule of activities in Markaz Tabligh Kubang Bujuk, Zul managed to finish 3 juzuk of his Quran recitation. Memories of when I was attending the Tabligh Ijtima’ in Tongi, 2017

On Zul’s last day there, he was sad to leave his new friends that he had just met through the program. A month there passed by like a breeze due to the hectic schedule filled with worship and dakwah activities. His heart was heavy and before he returned back home, Ustaz Rasyid gave his final advice to all the students there. Ustaz Rasyid who acts as the guide for the students asked Zul, “Zul, do you want to join khuruj again?” When I was in a mosque in Australia, I was greeted by a group of Tablighi Jamaat masyaikhs who were incidentally in a dakwah effort framework in Australia.

[1] Knowledgeable experienced men who has been in the tabligh dakwah group for a long time.

[2] Fardu ‘ain knowledge which one should learn from a teacher.

[3] Knowledge of the benefits of worship.

[4] An induction program explaining the purpose and aim of the Tablighi Jamaat or effort. Bayan would usually discuss the six main attributes that one should strive to have.

[5] Improving oneself in the Tablighi Jamaat effort. Certain programs are held for the islah through dakwah, ta’lim, worship, dhikr and service.

[6] Travel for the sake of Allah from one place to another, from one mosque to another mosque around the world to foster silaturrahim and dakwah or tabligh.

[14] Colleagues in an effort of dakwah and tabligh

[15] Knowledgeable or experienced people in dakwah

[18] Service of preparing food for the congregants

[21] Bayan for the congregants which are formed before khuruj, the most important matter is following the manners given in the dakwah and tabligh effort

[22] Bayan given after a congregant return from khuruj